Malnourished babies are held by their mothers, both of whom fled the drought in southern Somalia, at a feeding center in a camp in Mogadishu, Somalia, Feb. 25, 2017.

Somalia’s new prime minister says that dozens of people, mainly women and children, have died from water-borne diseases within the last two days as a result of the enduring drought in the country.

At a press conference Saturday in Mogadishu, Hassan Ali Khaire, announced the deaths, providing the first official figure after months of severe drought.

“I was informed today that more than 110 people have died due to the current drought only for the past 48 hours in parts of Somalia, particularly Bay and Bakol regions,” Khaire said.

He called on Somalis and the international community to put together a life-saving emergency response.

The International Organization for Migration (IOM) is appealing for $24.6 million to provide life-saving assistance to hundreds of thousands of the most vulnerable victims of Somalia’s drought. Humanitarian agencies report alarming similarities between the current situation in Somalia and the 2011 famine that killed more than one quarter of a million people.

U.N. aid agencies recently warned there is only a two-month window to avert a drought catastrophe in Somalia.

Local residents report there is an outbreak of diarrhea in parts of the Bay and Bakol regions in the southwest part of the country. In one village, 60 people reportedly died from the disease.

“Outbreaks of diarrhea, and some cases of measles are striking down people, mainly children already weakened by hunger,” Abdullahi Omar Mohamed, the chairman of the Ow-diinle village in Bay region, told local media on Saturday. 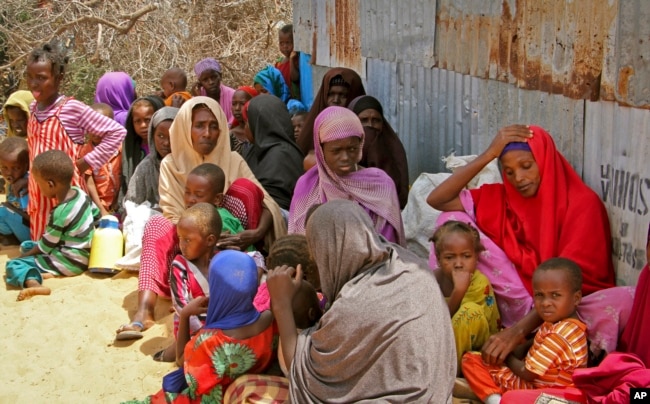 Displaced Somalis who fled the drought in southern Somalia sit in a camp in the capital Mogadishu, Somalia, Feb. 18, 2017.

Bay region’s provincial capital city, Baidoa, was once nicknamed the “City of Death” and is remembered as perhaps the hardest hit by the 1992 famine that claimed the lives of hundreds of thousands of people. It drove the high profile U.S. humanitarian effort in Africa that ended with dead Americans being dragged through the streets of Mogadishu, and the “Black Hawk Down” helicopter shootdown that changed U.S. policy in Africa.

Meanwhile, health officials in Somalia’s northwest Somaliland region have said that at least seven people have died from disease and malnutrition related to the drought.

News of the deaths and the spreading diseases has sparked alarm among aid workers, who are struggling to deal with the humanitarian crisis and the looming famine brought on by the severe drought and conflict in Somalia.

According to the United Nations, the crisis in Somalia threatens 6.2 million people, more than half the population. Conditions are driest in the north. Crop production and livestock numbers have fallen sharply after back-to-back poor rainy seasons last year.

Thousands of people have fled into overflowing camps for internally displaced people in major cities in recent months in search of food and sanctuary, but many still remain in the few al-Shabab-held towns and rural areas where aid agencies have only limited access due to insecurity.