A Muslim woman who’s photo went viral on social media after she was pictured at the scene of the London attacks has spoken out.

She was pictured walking by a victim who lay on the ground and was accused by some of not caring. 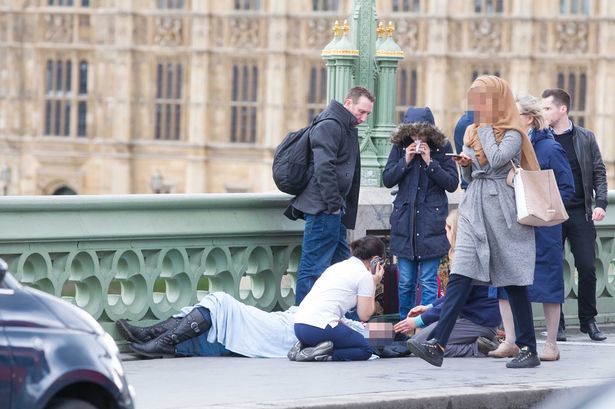 However, Jamie Lorriman, who took the photo said that she looked distressed after having witnessed the horrific scenes.

Jamie told The Mail Online, “She clearly looks mortified and it is obvious that she is in shock. The woman would have seen people under buses – she had just walked past the worst of it.”

Now, the woman who has been subject to an onslaught of attacks online has spoken out and given a statement to Tell Mama:

“I’m shocked and totally dismayed at how a picture of me is being circulated on social media.

To those individuals who have interpreted and commented on what my thoughts were in that horrific and distressful moment, I would like to say not only have I been devastated by witnessing the aftermath of a shocking and numbing terror attack, I’ve also had to deal with the shock of finding my picture plastered all over social media by those who could not look beyond my attire, who draw conclusions based on hate and xenophobia.

My thoughts at that moment were one of sadness, fear, and concern.

What the image does not show is that I had talked to other witnesses to try and find out what was happening, to see if I could be of any help, even though enough people were at the scene tending to the victims.

I then decided to call my family to say that I was fine and was making my way home from work, assisting a lady along the way by helping her get to Waterloo station.

My thoughts go out to all the victims and their families. I would like to thank Jamie Lorriman, the photographer who took the picture, for speaking to the media in my defence.”

A lesson we can learn from this is that a photo can never tell the full story and things can easily be taken out of context. We should verify information through reliable eyewitnesses.

“O you who believe! If a rebellious evil person comes to you with a news, verify it, lest you harm people in ignorance, and afterwards you become regretful to what you have done.”