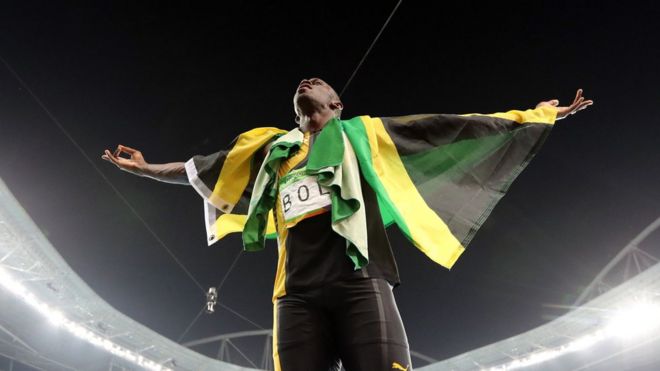 The Jamaican sprinter Usain Bolt has cemented his place as a legend of athletics at the Rio Olympics, earning his ninth gold medal in as many attempts.

He’s so fast that he could have finished 100m in the time it’s taken you to read up to here.

As he bids goodbye to the Games, let’s slice and dice his stats, shall we?

How long has he run for?

As a sprinter, Bolt spends very little time actually running. In Olympics finals, he has been running for only 114 seconds. That’s not even a full two minutes.

*Bolt’s individual time in his ninth race has not yet been published. We tried to time it from the TV but we don’t trust our reaction time on the stopwatch.

When you include the preliminary rounds, Bolt has spent only 325 seconds – a little under five and a half minutes – on the Olympics track, according to Associated Press.

That means he has picked up a gold medal for every 36 seconds spent on the track, including the qualifying rounds.

What else could you do in five minutes?

How fast is that then?

His relay times are quicker because they aren’t from a standing start. He’s already running when his team-mate passes him the baton.

And what about his reaction time?

He’s able to leave the blocks in 0.155 of a second. That’s super-fast. Don’t believe us? Try this test of your own reaction time.

How long would it take him to run to the moon?

OK, we’re being silly, but humour us here. IF you laid out track from the Earth’s equator to the moon at its closest point in its orbit… AND if Bolt kept running at his fastest speed from Earth all the way through space to the moon, he would get there in 9,713 hours.

Where would Boltland be in the medals tables?

If he had declared an independent republic of himself, Usain Bolt would have been27th in the Beijing Olympics medals table. His three golds would put him just above Cuba and below Georgia. In the London Olympics, he would have been26th – above Belarus and below Croatia. And in the Rio Olympics so far, he would be 25th, between Iran and Ukraine.

How fast is a lightning bolt?

And that’s not all…

Well after his winning sprint, Bolt posed for photographs in the stadium. With the lights being switched off, he had a few informal throws of a javelin he found lying about.

The last one travelled 50m – which would have been far enough to earn him sixth place at Jamaica’s national championships, AP said.